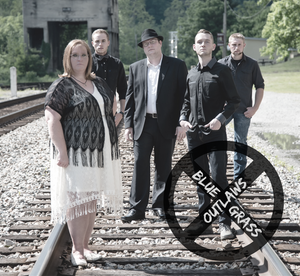 I knew it was gonna be great! That’s the 1st thing that comes to mind after listening to the Bluegrass Outlaws new release.

Having been a long time fan of Becky’s, I was expecting nothing less from her, but I had no idea that she and her husband Chris Monk had put together such a tight, melody driven, harmony singin’, songwriting band. WOW! I’ve been completely taken by surprise.

Though I do not know the rest of the group as well as Becky, in there coming together, they have a cohesiveness that sounds like they’ve been recording together for years. Something obviously not overlooked by the fans at SPBGMA, where they took the 2016 honors for the best new band. And get this...they debuted as a band there and were on stage as a band together for the 1st time and WON! That’s gotta be a record of some sort!

My curiosity tweaked after a first listen, I began to dig deeper into the material the Bluegrass Outlaws had chosen to record…. There’s always a story behind the record.

I first noticed that there were several titles on here that I was not familiar with...no wonder they’re original and they are flat out good. Here’s what else I found.

Well folks, that’s my look at the CD and while I realize these musings are just one man’s opinion, I believe that these folks, if they can navigate the tough waters that lay before them in the days ahead, are destined for really BIG things in the bluegrass world. I urge you, as you listen to this great CD, to let your local radio stations know that you are passionate about the music inside these grooves….after all you are the final judge.